Recently I hosted Minsk Atlassian User Group, where I shared our experience on migrating to Stride and gave the analogy between Stride, and Russian word ‘Stradai’ (-> eng.: ‘Suffer’). I’ll explain the analogy later. Hence the ‘Napalm Death’ song ‘Suffer’ joke on the first slide 🙂

Given that a lot of people use Telegram as a corporate messenger, and given all of the telegram-blocking happening in Russia currently, it’s pretty relevant to write about alternatives. We at SkuVault migrated due to the need of user control, but migration experience is relevant to many other teams.

Atlassian launched Stride as a HipChat Cloud replacement (so we can call it hipchat 2.0). Main competition is Slack, which is currently de-facto corporate messaging standard, as we know. I’ll compare Stride to Telegram and Slack in areas they are strong.

Biggest point of Stride is that it connects to your atlassian ecosystem. Typically you got single account for Atlassian User, from which you can manage entirety of Atlassian Permissions. Now, Stride is added as an application to the very same account, and access / admin rights are easily managed from the very same place. If you want to have control over the users and the ecosystem that is locked to Atlassian (as we do) -> this is an ideal scenario.

In Telegram we had personal accounts, which you don’t have control of (sure you can create virtual / work phone numbers and link them to telegram to make it corporate-friendly, but that is kind of a crappy way to maintain users ecosystem).

In Slack – you have to pay more than $3/user and it’s a separate account management system.

User Control means removing a person, when she no longer works at the company, visibility for messages in order for infosec to not be compromised.

It may not be something you’d count as a pro, but given that we previously used Telegram + Skype for calls (with hangouts as a fallback in case of skype outage), it’s nice to have same app doing everything.

Integration with Jira and Confluence (not out-of-the-box-though) gives you a glimpse of the ticket in the chatroom (ticket card that reflects priority, assigne and editable layout), ability to create tickets as a command to chat-bot (create new bug Fix spacing on signup page in SV project), bitbucket PR review poking, and a lot of neat other things you’d expect inside the Atlassian ecosystem). 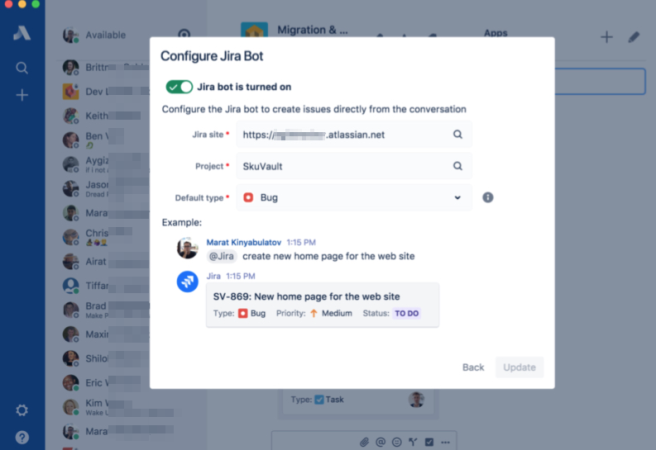 Mentions, citation, styles for text. NO HASHTAGS THOUGH – giant bummer! 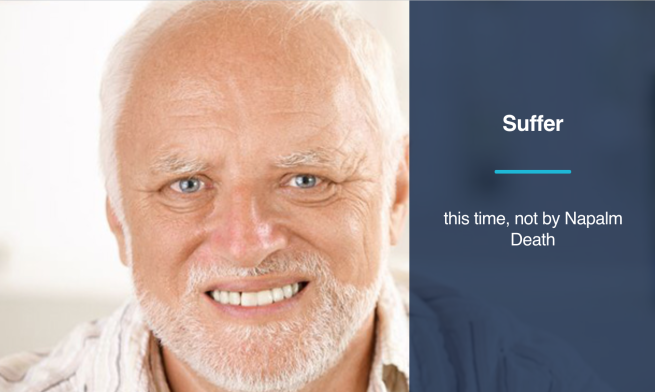 And here’s my analogy of ‘Stride’ to russian word ‘Suffer’: you can use Stride, but it’s still raw, and a lot of features you’d expect to be basic in messaging, are half-baked in Stride.

Let’s admit, that Slack sucks at group video calls as well. But Stride is much worse 🙂

Ok, done with the video calls!

They are horrible (not Rocky-Horror-Show or Dr. Horrible way, and not even Troma-way. They are as bad as most coffee in US (ha-ha)). The sound of notification is bleak and unnoticable. You can’t change it, even if you rip apart the guts of app package and assemble it again 😦 That results in people not reacting on urgent messages. 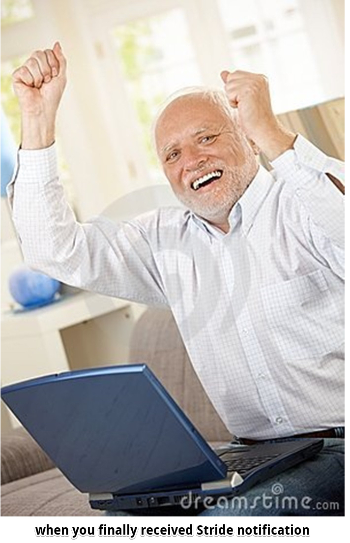 There is no mute for chat rooms, which results in information overload and renders the whole notifications system pointless.

There is no indication that your message was read by your counterpart. You don’t know whether to poke your colleague or he already read this.

Phone gets 2/3rds of all notifications. But when it does – mac app doesn’t show any of those! This is a typical failure, I’m writing this post on the train from Brest to Minsk where I ride to host AUG Minsk, and our team notified me with long message on my phone, but i see no new messages in my mac app. I have to restart it to get those messages.

Although integration with jira bot is neat (hey, slack does that even better, actually), it crowds chat room’s vertical space like a giant worm that digs Jasinto in Gears of War 2. If you dump number of tickets to dicsuss in the chatroom, you can’t read any message because card previews will occupy the whole 2-3 screens of vertical space. 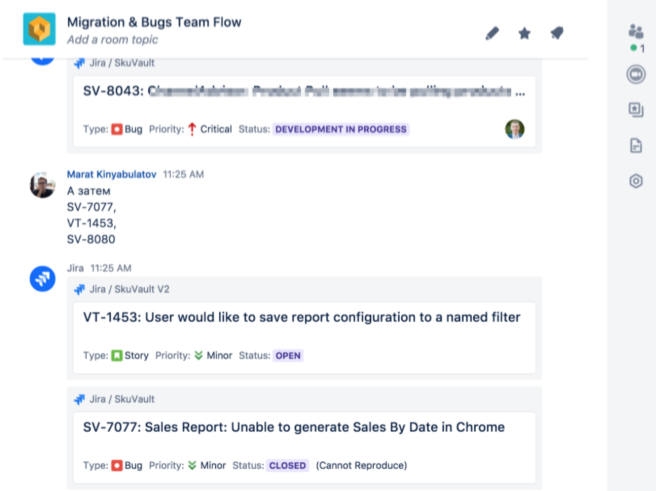 As per our admins, Stride doesn’t parse JSON on itself, so basically you have to parse and feed parsed JSON to the API yourself. Not the case with telegram.

Stride is not-horrible-beyond-anything, it’s ok. You can use it and adjust to it. Especially if you’re locked to Atlassian Ecosystem (and I love and use jira, even after the latest interface update). But if you’re already on slack – there’s no point, it will work better for now.

There are a lot of things to improve, and the guys at Stride work on making their product better. It took 5 years to telegram to become the best and neatest messaging platform, it took same number of years for Slack.

So we’ve survived Ufa Atlassian User Group, the very first meetup, with 17 people visiting our office to hear about jira, confluence, bitbucket and other atlassian products 🙂 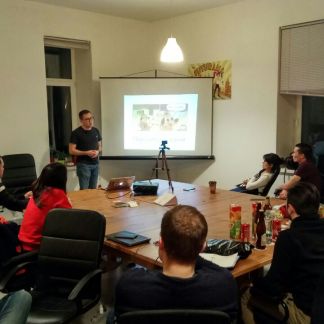 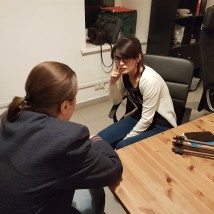 We’ve discussed how Jira helped us in reflecting SkuVault development processes, and how do we keep documentation on the feature in Confluence, until it’s released, and what info do we store there.

Panel consisted of Smena.io, modulbank, MEGI, and a couple other teams 🙂 Presentation is available in Russian via this link: UfaAUG_1.

Stay tuned at https://aug.atlassian.com/ufa/ for more events in Ufa 🙂

Recently buddies from Moscow recommended me to join Atlassian User Group Leaders,to host Atlassian events in Ufa, so here I am (after an interview with Atassian)!

First ever-ever Atlassian User Group with special Atlassian swag will be happening January 30 2018, 7pm 🙂 Meetup related to all things atlassian and related! Follow the link and save the date 🙂 https://aug.atlassian.com/events/details/atlassian-ufa-presents-ufa-atlassian-user-group-1#/

More topics to come, from our local Atlassian Users 🙂